NWR Board and Senior Management cut salaries by 25%

Windhoek, 20 September 2020 – For the past six months, all tourism companies have been severely affected by Covid-19. Namibia Wildlife Resorts Limited (NWR) being one of the dominant players was not spared from the impacts of the pandemic. With the negative effect on the operations of the business, NWR has had to pursue extensive cost-cutting and revenue-enhancing measures that enabled it to continue as a going concern.

“Whilst we aggressively cut-costs and continue to do so, we are not making any significant revenue at the moment. With Covid-19 being a part of us for the foreseeable future, our Board, Managing Director and Senior Management, with an E-Patterson grading, took a decision earlier this month to cut their salaries by 25%, effective from September 2020” says Mr Mufaro Nesongano, NWR Corporate Communications, Online Media and Sponsorships Manager.

It must be noted that this is not a populist decision but a deep-seated desire from the NWR Board and Senior Management team to ensure the company’s longevity and survival. “It is no secret that we play a vital role within the tourism sector as well as the Namibian economy. Thus, this decision is aimed at providing the company with further savings as we continue in uncharted waters” says Dr Matthias Ngwangwama, NWR Managing Director.

NWR looks to the future

Windhoek, 3 September 2020 – The Namibian Tourism Industry is currently experiencing one of its biggest challenges in recorded history and memory. As with all companies in Namibia and the world over, the past five months have been challenging and distressing.

In response, Namibia Wildlife Resorts Ltd (NWR) adjusted its business operations to withstand the challenges brought about by Covid-19. NWR embarked on various actions, such as signing a Memorandum of Understanding (MOU) with its social partner the Namibia Public Workers Union (NAPWU) which resulted in cost-cutting measures for the better good of the organisation. Equally, NWR adopted a new pricing model targetting the domestic market, which was able to sustain its operations thus far.

However, it is no secret that the domestic market alone is not sufficient to sustain the tourism sector. Thus, the official opening of the Hosea Kutako International Airport (HKIA) on 1 September 2020 as part of the Tourism Revival Initiative announced by the Namibian Government is a much-needed encouragement to the sector and NWR in particular. “We are aware that the opening of the HKIA is one of the steps towards the revival of the industry. We are hopeful that through its opening, a more positive sentiment will begin to filter into the industry as international travellers start arriving” says Dr Matthias Ngwangwama, NWR Managing Director.

Before the official opening of the HKIA, the industry had been and continues to be affected by the pandemic. Similarly, some of the travel limitations cast further doubt on any company in the industry recovering in the short-term. “We are, therefore, very mindful of the role that we fulfil in the Namibian business arena and social ecosystem. Thus as we look to the future, we understand that there is a long way to go before the sector experiences some of the occupancies it had pre-COVID-19” says Dr Ngwangwama.

Our booking system is currently unavailable, please forward all bookings to reservations@nwr.com.na 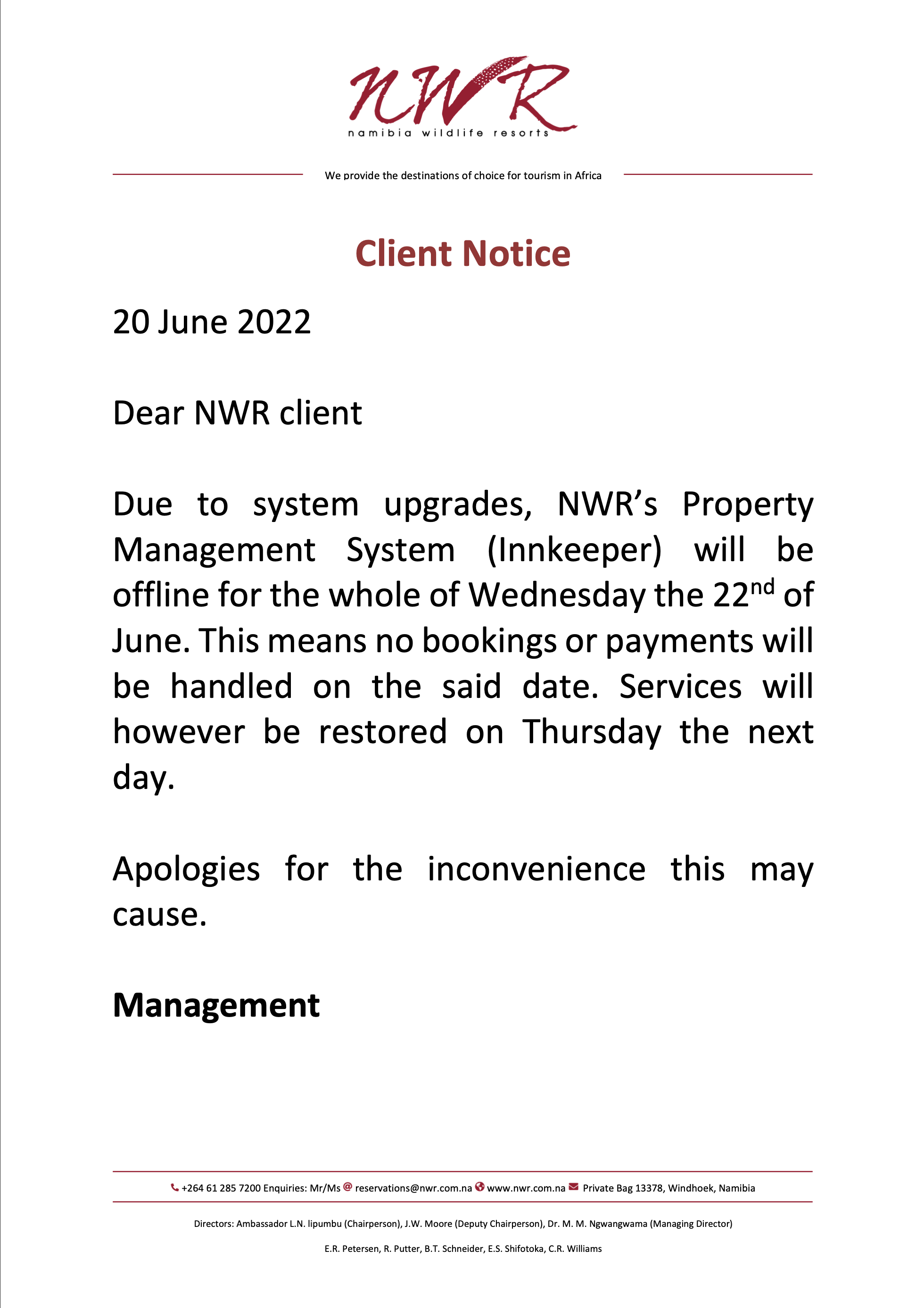