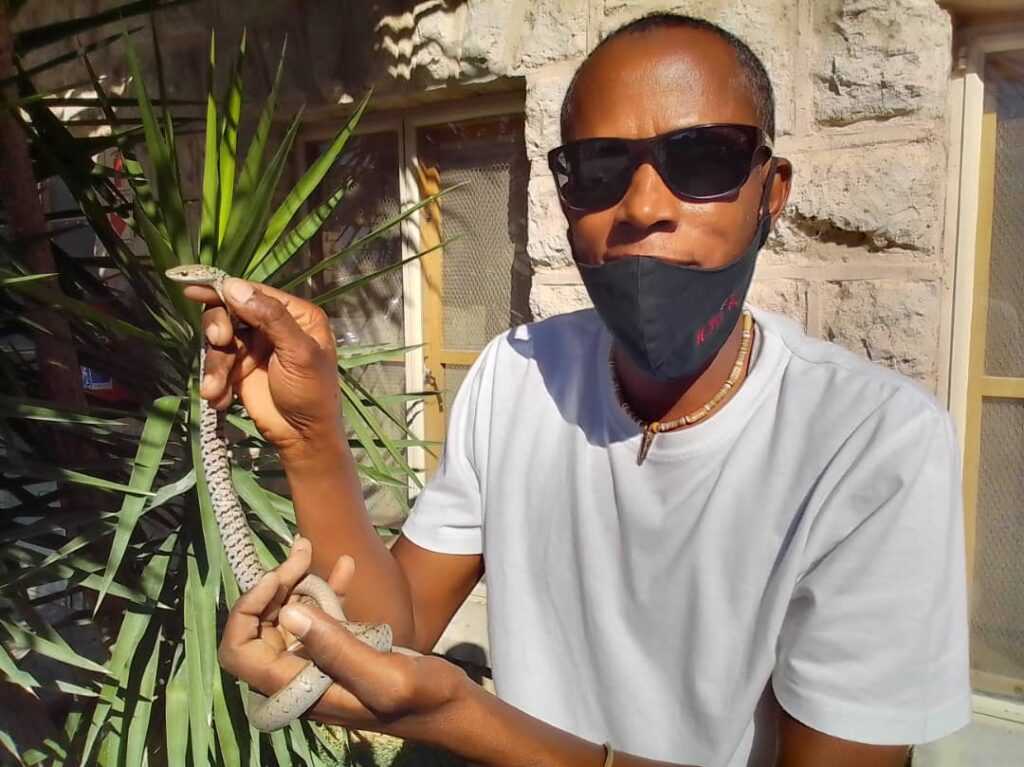 Michael !Goreseb showing one of the snakes he recently caught

Windhoek, 9 November 2021 – The mere mention of the word snake sends chills up some people’s spines, however for Mr Micheal !Goreseb, Namibia Wildlife Resorts (NWR) Limited snake handler, these species fascinate him. Having worked at NWR’s Namutoni resort for the past 14 years and recently relocated to Okaukuejo resort in the last two months, Mr !Goreseb has come into contact with all types of snakes over the years.

Mr !Goreseb is originally from Otjiwarongo; however, he grew up and schooled in Tsumeb, where his mother moved to when he was younger. He got introduced to snake handling from an early age by his grandfather, who was also a snake handler. As he grew older, he continued sharpening his skills, thereby making it easier for him to catch all types of snakes.

“When I was a young boy, I started to catch these venomous snakes and all other types of snakes. That’s how I got into catching snakes,” says Mr !Goreseb. He further adds that “when one catches a snake, one should release back into the wild. This helps maintain the ecosystem. However, if you kill it, you will disturb the ecosystem”.

Over the years, he has gotten better at identifying the different types of snakes to the extent that he sometimes allows some of them to bite him, but he is quick to add that “I know the differences between the different types of snakes, so I’m always trying not to be bitten by the venomous ones but the mild venomous ones. Because when they bite you, the spot that would have been bitten will swell up and subsides after a few days”.

When he recalls the most venomous snake that he has caught, the black mamba comes to mind. Thus far, he has caught three black mambas, with the latest one being 3.6m long. His future plans are to grow in his profession to the point that he is recognised throughout the country as one of the best snake handlers around.